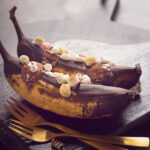 Soft and sweet grilled banana boast sprinkled with smokey bourbon and covered with a layer of chocolate and sticky marshmallows. An easy and delicious BBQ dessert.

Sometimes you feel like something sweet after the BBQ. Most of the times I make a casserole with grilled s'mores, a delicious recipe, with chocolate, cake and caramel. Now I thought there was nothing that could top that. But these grilled banana boats with bourbon, chocolate and marshmallows are just as delicious. And nice as a change.

The idea for a new dessert evolved

You may be wondering how I got this idea for banana boats, but that's because I'm linked to the duizenden1dag blog for the July Food Blog Swap. And there I found bananas with rum and vanilla sugar. Deliciously prepared on the BBQ.

Now the intention is that you give such a recipe your own twist. And that became the addition of chocolate and marshmallows. And I replaced the rum with bourbon because I thought it would go even better with this as a flavor (and it was ;-))

This is a really delicious recipe for banana boats with bourbon, chocolate and marshmallow, but maybe you want to vary a thing or two. Here some nice ideas:

Banana boats can't be prepared in advanced because they will turn brown. You eat them right away. And you can't freeze them either. But what can you do:

Print SaveSaved!
Soft and sweet grilled banana boats sprinkled with smokey bourbon and covered with a layer of chocolate and sticky marshmallows. An easy and delicious BBQ dessert.