Homemade Appelflappen, those Dutch puff pastry apple turnovers, are one of the most famous pastries in the Netherlands. Crispy sugared puff pastry filled with a mix of a warm and delicious apple filling with cinnamon and raisins. So easy to prepare and tasteful. This is a crowd-pleaser for sure!

Appelflappen is a traditional pastry in the Netherlands and is a hand pie. You can buy them at our bakeries, local stores, and supermarket. But most Dutch people prepare these sweet treats themselves because they are so easy to prepare.

A Dutch Turnover is a puff pastry sheet folded into a triangle. It’s filled with apples and cinnamon, with the addition of currants (or raisins) or almond paste. This is quite the same as an apple pie filling. The pastry is given an egg wash, and some (cinnamon) sugar is sprinkled on top. This delicious treat with a sweet apple filling is baked in the oven until it’s golden brown and hot. (so watch out when taking the first bite, make sure it’s cooled a bit; otherwise, you will burn your mouth).

Sometimes it’s thought that appel beignets (Dutch Apple Doughnuts) are the same, but there’s a lot of difference. An appelbeignet is a piece of apple covered with a batter and deep-fried. And the doughnuts are eaten on New Year’s Eve. On the other hand, appelflappen are eaten whole year-round, not only in the apple season. So let’s start making this easy apple turnover recipe!

What do you need for homemade apple turnovers?

To prepare these Dutch appelflappen, you need the following ingredients. You can find the correct amounts in the recipe card at the bottom of the blog:

How to prepare Apple Cinnamon Turnovers

You can find a printable recipe with a step-by-step description at the bottom of this blog.

When serving, make sure to cool the hot apple turnovers a bit because the cooked apples are hot, and you could burn the inside of your mouth.

Watch How to Make It 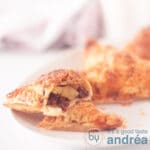 Print SaveSaved!
Homemade Appelflappen, those Dutch puff pastry apple turnovers, are one of the most famous pastries in the Netherlands. Crispy sugared puff pastry filled with a mix of a warm and delicious apple filling with cinnamons and raisins. So easy to prepare and tasteful. This is a crowd-pleaser for sure!

1. Apples - The fresh apples are peeled and sliced into cubes. Suitable apples are Elstar, Jonagold, golden delicious, granny smith apples, or Cox. It is better not to use a golden reinette, pippin (or any other stewing apple). The texture is less tasty after baking. 2 Puff pastry - This recipe uses slices of butter puff pastry. The sheets are 4 x 4 inches (10 x 10 cm). You could use fresh or frozen puff pastry. Make sure to thaw before use. 3. Egg - used for an egg wash. It ensures the puff pastry will bake golden brown, and the sugar will stick to the apple turnovers. 4. Oven - When using a conventional oven, set the temperature to 390 °F (200 °C). In a convection oven, 350 °F (180 °C) is enough. 5. Storage  6. Nutritional value - The nutritional value is per serving, assuming there are six delicious apple turnovers prepared.