These skinny apple fritters are delicious crunchy, with a soft apple inside and dusted with cinnamon sugar. It is made in the oven, and thus it becomes a slimmer variant!

After all those heavy days (in terms of food then) it could be nice to enjoy a New Years Eve snack, without the scale rising to new heights. And let's face it a Dutch donut (or oil ball in Dutch) has a good reason it's called an oil - ball. And the same goes for apple fritters. Fried in oil it becomes an oil-rich snack. But they are so tasty, I hear you say. Completely true! I love it.
And so I made this variant of the apple fritter. Not with a batter (for that would drip and that's not very handy), but with a shell of puff pastry. And then baked in the Air Fryer. Yes the deep fryer without oil. But you can also use the oven to 180 degrees if you don't have one! And it consists of only five ingredients. Sounds easy enough? 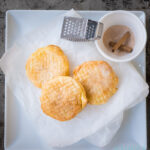 Print SaveSaved!
These skinny apple fritters are delicious crunchy, with a soft apple inside and dusted with cinnamon sugar. It is made in the oven, and thus it becomes a slimmer variant!