How do you make fudgy brownies with a delicious intense chocolate taste in four easy steps? By mixing two types of chocolate in the batter. This recipe is easy and made in four simple steps. And when ready your family and guests will love it!

Every family should have a perfect basic brownie recipe. And from there you can make all kinds of variations. In any case, this recipe is a great basis to start with. It gives a delicious creamy brownie, with a full chocolate flavor that seems to melt on your tongue. And the recipe consists of just four easy steps. So these creamy brownies are also super easy to make. I say go for it….

Fudgy and chewy vs baking time

Everybody has their own taste and demands how the perfect brownie should be baked. You can choose really fudgy, where your chocolate drips out of the brownie, a brownie with a cake structure, and a brownie in between. I'll give you the baking times of the different variants:

Step 4 - Bake the fudgy brownie in the oven.

How do you get fudgy brownies?

Whether you get cake-like or creamy (fudgy) brownies has to do with the ratio of fat to flour. The more flour, the more your brownie resembles a cake. The more fat (in the form of butter and chocolate in this recipe) the more creamy they become.

Do brownies need to cool before you can cut them?

Yes. Brownies harden when they cool. If you cut them warm, it will become a mess and you will not get nice blocks of brownie. 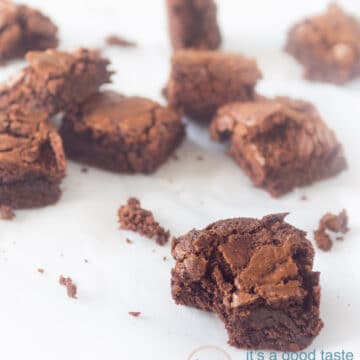 Print SaveSaved!
How do you make fudgy brownies with a delicious intense chocolate taste in four easy steps? By mixing two types of chocolate in the batter. This recipe is easy and made in four simple steps. And when ready your family and guests will love it!

1 - Au bain-Marie Melt the chocolate au bain-Marie so that it does not burn. To do this, bring a pan of water to a boil. On the pan, you put a bowl that hangs above the water. In this bowl, you put the chocolate and butter. 2 - Airy You first mix half of the egg with the chocolate. This way the chocolate gets used to the egg. Then beat the egg until it is very light and gently mix it into the batter. This gives you an airy brownie. 3 - Fudgy versus cake brownie - This brownie has more fat (chocolate and butter) compared to the flour. This makes it a fudgy brownie. For a brownie that looks more like cake, add more flour. 4 - Cooling down Let the brownie cool in the tin. It will harden, which ensures a crispy top layer. The inside remains nice and fudgy. 5 - Also delicious Add 3 tablespoons of chocolate chips to the batter for little chocolate explosions in your mouth. Finely chopped walnuts are also delicious to add. 6 - Storage
Room temperature - Store the brownies in an airtight box (or wrap them in plastic wrap). This way you can keep them at room temperature for up to 3 days.
Freezer - If you want to keep them longer, freeze them! Wrap the brownies individually in plastic foil and then in a freezer box. This way you can keep them in the freezer for up to 2 months. 7 - Nutritional facts ​​- You can make 16 square brownies with this batter. The nutritional values ​​are shown per brownie.