A recipe for traditional eggnog. Creamy, airy, and rich in taste. That's a perfect description for eggnog. A drink that is made and consumed at Christmas abroad. I can totally imagine why.

Curious, that's the right word. I have been curious for a couple of years now. Do you know why? I see large amounts of eggnog recipes come by in the Christmas period. Therefore, I made Dutch spicy eggnog made from advocaat (a typical Dutch drink). But this time I went for real. I'm going to make traditional eggnog.

After a long search on the net, I found out through Wikipedia that it used to be a cocktail of egg, milk, and brandy. Nowadays the brandy is often replaced with dark rum or bourbon. Now, that sounds good.

And for extra creaminess, some heavy cream is added. And spices like cinnamon, vanilla, and nutmeg. But every region and family has its own recipe. I finally made this eggnog to my own taste and I was very pleased with the flavor.
We also are going to drink eggnog this Christmas! 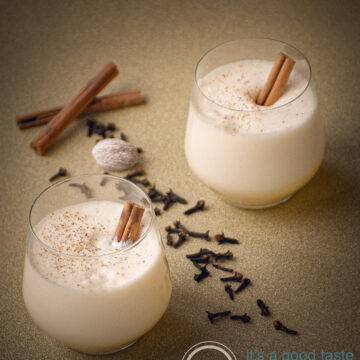 Print SaveSaved!
A recipe for a traditional eggnog. Creamy, airy, and rich in taste. That’s a perfect description of a eggnog. A drink that is made and consumed at Christmas abroad. I can totally imagine why.