A tasty Belgian endive casserole with bacon is simmering in the oven. A delicious recipe that even my kids love. The base is a creamy chicory potato mash which is then rolled in a slice of ham. The mash is flavored with bacon, cheese, and sage. Let this casserole gratin in the oven and you have an easy flavorful meal.

Well, if you enter a weekly coop produce subscription, you get surprises. For example Belgian endive, something no one in this family likes, and some even up to now refused to eat.

But throw it away and not eating it isn't an option, so I decided to find a recipe that is edible, and maybe even tasty.
And just when you've already tried several options (stir-fry with soy sauce, thin rolling up in ham with cheese cream sauce) and still negative reactions is your part, the tide can turn.

In a national newspaper about a week or two ago, a recipe of a Belgian endive casserole was written. Everybody loves casseroles over here, so that's already a plus.

The recipe is slightly adapted, and I put it on the table tonight, and … (drum roll) … it was approved. There was even one who said it was tasty. Tada, there I did it. And such a recipe, it is of course to be placed on my site.

🔪 How to prepare a chicory casserole

Step 1: peel, cut, and cook the potatoes. Peel the potatoes and wash them. Quarter or half the biggest potatoes. Bring a pan with water to the boil, about 2 inches (5 cm) of water, and add the potatoes. Cook them for 10 minutes.

When the potatoes and chicory are done, drain them. Then mash everything with a potato masher. Add the butter, cheese cubes, finely sliced sage, and crispy bacon. And mix everything well.

Step 4 roll the ham and gratin the cheese. Put a slice of ham in front of you and add 3 tablespoons of mash on one side of the ham. Roll the ham and put it into the oven dish. Repeat for all the slices. Sprinkle grated cheese on top.

If you like this chicory casserole (made of a mash), then you might find these recipes worth trying. Or you like one of these dinner recipes. 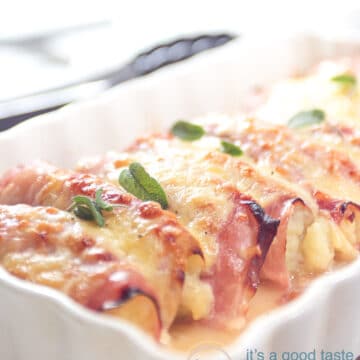 Chicory casserole (that even my kids love)

Print SaveSaved!
Not all vegetables are easy to prepare for your family and get joy all over. But this recipe for Belgian endive casserole even my kids loved.