Bread pudding with apple and cinnamon. Leftover recipes at it's best. Tastes like an apple pie on your plate, but without the butter. A warm dessert, great for cold days.

Winter = apple time. At least in this household. We love apples and I process them all over, we eat them plain as a snack, of course. But I also make Apple jelly, desserts and cakes, and also a delicious apple stew. Every winter it's apple time and all the dishes come by.

Now I had some leftover bread last week. That might not sound strange to you, but here it's an exception. With three sons, from who two teenagers, I blink my eyes and the bread is gone. A lot of bread is eaten every week. But this time very strange, there was still some leftover. And stale bread is not one of our favorites. So I decided to make a delicious bread pudding with apples. And of course, cinnamon, because apple and cinnamon is a golden combination. Bake in the oven and you get a delicious dessert. A bit of an apple pie on your plate. A warm dessert, which was great welcome given the cold days.

So if you've got some leftover bread and some apples, then this tip: make this bread pudding with apple and cinnamon. It's delicious

Recipe Bread pudding with apple and 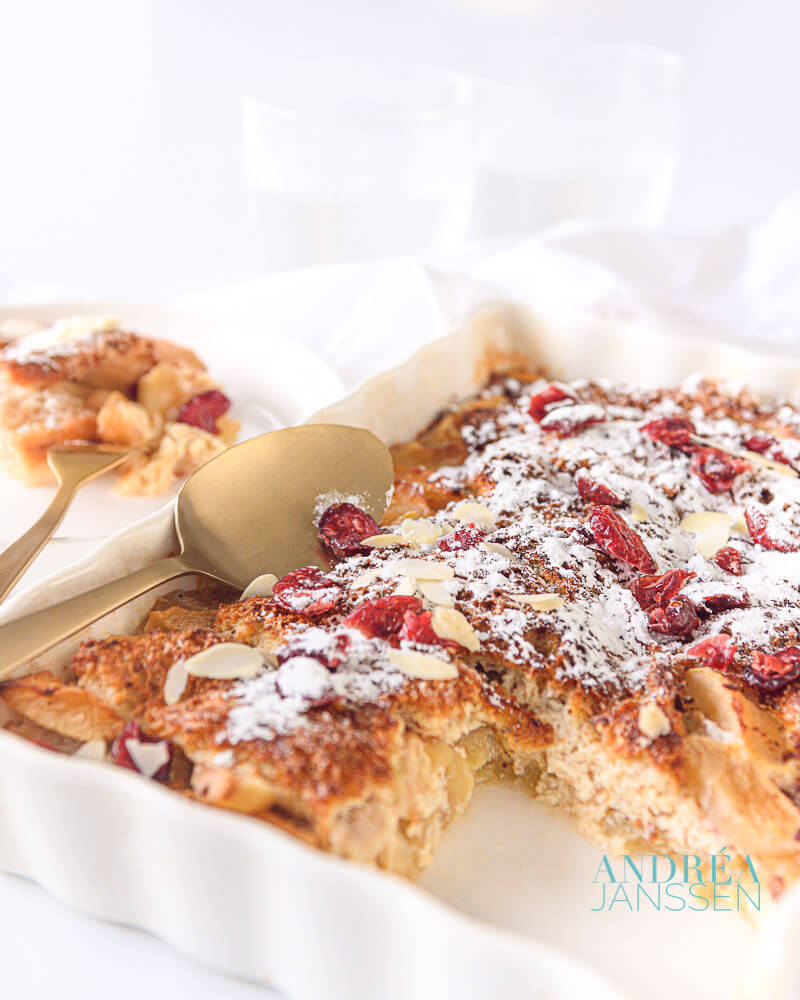 Did you make this bread pudding with apple and cinnamon? Tag #byandreajanssen via Instagram or twitter . I love it when you make one of my recipes and I’m looking forward to look it up.  You can also share your recipes on my Facebook channel or pin this recipe on Pinterestso you can find it easy next time. See you soon!

Bread pudding with apple and cinnamon

If you want to acces your recipe collection, follow this link.  and choose favorite recipes. Good luck

Don't miss anything and receive our newsletter. Sign up!

By Andréa Janssen is onderdeel van Janssen-Fotografie.
privacy policy
We use cookies to ensure that we give you the best experience on our website. If you continue to use this site we will assume that you are happy with it.Ok