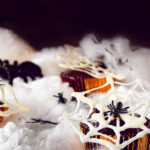 These Nutella chocolate cupcakes are delicious filled and dipped in chocolate glaze. For Halloween white chocolate cob webs are added.

A sweet recipe that is also great as a treat at school: chocolate cupcakes filled with Nutella. It is a recipe that will certainly make you happy, because it maybe looks like this is quite a difficult recipe, but nothing could be further from the truth. Excluding cooling time and drying time, you can make them in half an hour. That's not so bad, right?

Do you need paper cupcake forms?

Cupcake molds are not really necessary. You can also grease the baking tin with butter or oil and the cupcakes can then be easily removed after baking them. Just like you would with a normal cake.

But cupcake paper forms naturally give a nice effect to your cupcakes. You can show your theme or ingredients with the paper cups. But the choice for using them is therefore entirely yours.

How do I store my cupcakes?

By quickly cooling the cupcakes after baking and packing them in a plastic foil or an airtight box, they stay moist for up to two days. You can simply store them at room temperature. Don't pack them in an airtight container or foil when they're warm because that way the top will get moist.

If you want to make your cupcakes in advance, you can also freeze them. But don't add the topping and filling. After baking cool them down quickly and pack them airtight. This way they you can store them in the freezer for up to 3 months. Let them cool on the counter a few hours before you're going to serve them.

How can I moisten my cupcakes when they're dry?

If your cupcakes are a bit dried out there's a trick to get them moist again. And it's really easy to: you can put them in a plastic bag along with a slice of white bread. Close the bag and let this stand for a few hours at room temperature. The cupcakes will absorb all the moisture from the bread (and the slice of bread will therefor get very hard). Take the slice of bread out of the bag and serve your cupcakes.

Why are my cupcakes collapsed in the middle?

If you beat your cupcake batter too much and/or for too long, it can cause you're batter to be overmixed, because there will be too much air in it. Therefor when you bake the cupcakes, that air wants to get out of the batter and will do so through the center of the cupcake. That causes the hole in the middle. So when baking stick yourself to the times and speed of the mixer mentioned in the recipe.

And if it would happen with this recipe, then there is no problem at all. In this recipe you're going to fill these cupcakes with Nutella anyway, so you won't see it afterwards.

To prepare this ultimate choc-o-holic cupcake recipe you need the following ingredients:

How do you prepare these chocolate cupcakes with Nutella filling?

At the bottom of this blog you can find a printable recipe, where every step is described in full.

Step 2: Mix the flour, salt and cocoa in a bowl and set aside. In a second bowl mix the sugar, butter and oil. Then add the egg and vanilla extract. Turn the mixer on low speed and mix the flour mixture into the batter. Mix the coffee through the batter with a spatula.

Spoon the batter into the molds and bake for 20 minutes at 350 degrees Fahrentheit (180 degrees Celsius). Let the cakes cool slightly for 5 minutes and remove the cupcakes from the baking tin. Let them further cool down to room temperature on a wire rack.

Step 3: Make a small hole at the top of the cupcake with a spoon and fill it with the Nutella.

Step 4: Heat the chocolate glaze and pour over the cupcakes. Tip: Line a baking tray with baking paper (or aluminum foil) and place the wire rack on top. You can now collect the excess glaze on your baking tray, which saves a lot of cleaning work afterwards. 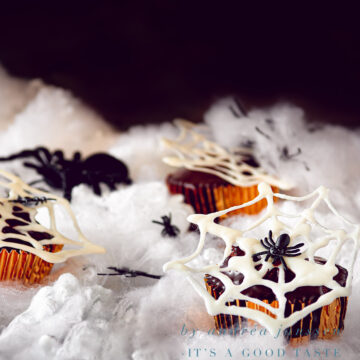 Print SaveSaved!
These chocolate cupcakes are deliciously filled with Nutella and dipped in chocolate frosting.For Halloween we made white chocolate cobwebs.