Chatti Pathiri, a traditional Indian casserole with chicken and spinach and some warming spices. And this is where all those delicious Indian flavors come together. It is a crêpe pie with a savory filling. Build up layer by layer and cooked in coconut milk. The result: a creamy dinner pie with a WOW factor.

Today on the blog a dish called Pathiri. Ever heard of it? Well, I didn't before making this recipe. Pathiri originally comes from the Arabic word for dough or pastry.

And that's what it actually is. A savory pie. It is actually similar to a lasagna, in terms of layers, but instead of dough sheets, you use pancakes.

Chatti Pathiri is a recipe from the Indian kitchen. At a Pathiri, various pancakes are baked and, alternated with a savory filling, stewed. I opted for a filling of minced chicken with (how could it be otherwise) Indian spices and spinach. But the possibilities in terms of filling are endless.

After making it, the spicy chicken filling, which was so deliciously flavored with all kinds of spices, turned out to be a nice sublayer from the pancakes. The coconut milk, in which the dish was stewed, made it wonderfully creamy. A special and delicious recipe.

This recipe is from the Daring Kitchen and was brought to us by Joanna.

A recipe that can be printed can be found at the bottom of this blog in the recipe card.

Step 1 - Make the batter and bake the crêpes

Step 3 - Fry the filling for the Chatti Pathiri 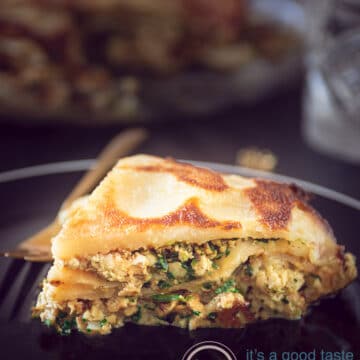 Print SaveSaved!
Chatti Pathiri, a traditional Indian casserole with chicken and spinach and some warming spices. And this is where all those delicious Indian flavors come together. It is a crêpe pie with a savory filling. Build up layer by layer and cooked in coconut milk. The result: a creamy dinner pie with a WOW factor.

1. Chicken In this recipe I use chicken fillet. You can also replace this with (natural) minced chicken. If you want to go vegan, substitute chicken with mushrooms.
2. Crêpes - Make sure to bake very thin pancakes. Otherwise, they will become predominant in taste.
3. Alternate - Spread the filling thinly over the crêpes. The thin crêpe with the thin layer of filling is what makes this Chatti Pathiri so delicious.
4. Oven - This savory pie is baked in a convection oven. If you want to use top and bottom heat, bake the Pathiri at 375 °F (190 ° C).
5. Also tasty - It is also nice to mix the filling with coriander or fresh parsley.
6. Nutrition - This recipe is sufficient for a dinner with 4 adults (or 2 adults and 3 children). The nutritional values are calculated per person.