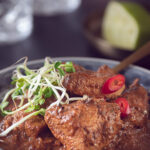 Chicken Tikka Masala is a classic dish from Indian cuisine, and that's for a good reason. First, the chicken is marinated in the famous yogurt marinade. Then, baked and stewed in a delicious curry is full of flavor with a creamy sauce. The flavors soak into the chicken, and that makes it irresistibly delicious. And while the list of ingredients is extensive, they are all very easy to get!

One of the tastiest dishes from Indian cuisine that I know is Chicken Tikka Masala.

It's not even an authentic Indian recipe, but a British Indian recipe. We often think curries are part of Indian cuisine, but they're a British addition. But that's what makes this recipe so delicious.

Not only do I enjoy the flavors. The enjoyment starts with preparation. All the smells that are released. The whole house smells wonderful. And when the dish is finally on the table, it lives up to all expectations. A homemade Tikka Masala without packets and bags with delicious chicken and a curry of cream, no ready-made sauce can compete with that.

My Tikka Masala dish is an adaptation of the recipe from Jamie Oliver.

What exactly is Tikka Masala?

Tikka is the Indian name for chicken that is marinated in spices combined with yogurt and then fried or roasted. Masala is the spice mixture, the curry, in which it's stewed.

Sometimes the sauce is colored with food coloring turning it into a bright red or orange curry. But the coloring doesn't add extra flavor; it's just a nice touch for the eye. This chicken tikka masala is quite a popular dish that is made and eaten all over the world.

Is this delicious Curry Indian or British?

That is a good question. The Tikka, a roasted chicken, is a recipe from the Indian kitchen. It is widely made and eaten throughout India.

But if you are ever in India and are tempted to order Tikka Masala, it turns out that it is not a traditional recipe. Curries are not common in traditional Indian cuisine. Instead, it's an addition originated from British influences, who like to see their meat served in a gravy sauce. So that's why the Masala sauce is the British addition to this recipe. And so, Tikka Masala is an Indian and British recipe.

What do you need for Easy Tikki Masala With Chicken?

To prepare this Chicken Tikka Masala, you need the following ingredients. You can find the correct amounts in the recipe card at the bottom of the blog:

A printable recipe in easy steps can be found at the bottom of this blog.

If you want to garnish this curry, use coriander, or if you don't like that, flat parsley. 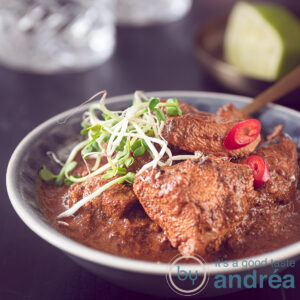 Print SaveSaved!
Chicken Tikka Masala is a classic dish from Indian cuisine, and that's for a good reason. First, the chicken is marinated in the famous yogurt marinade. Then, baked and stewed in a delicious curry is full of flavor with a creamy sauce. The flavors soak into the chicken, and that makes it irresistibly delicious. And while the list of ingredients is extensive, they are all very easy to get!

1. Chicken breast - This recipe uses chicken breast or chicken tenderloins. 2. Butter - Use unsalted butter to make the sauce creamier. You could also use ghee. Ghee is clarified butter that is widely used in Indian cuisine. It's available at larger supermarkets and Asian Supermarkets. 3. Tomato Paste - To deepen the flavor. But make sure you use it properly. To give it its delicious rich, and slightly sweet taste, bake it for at least 2 minutes. 4. Garam masala - An Indian roasted spice mix. Every region has its method of preparation. You can get it at the Asian Supermarket. 5. - Storage 6.- The nutritional value is per person, assuming you eat this with five people.