Dutch sour meat, zoervleisj in Limburg dialect, as the name implies, is meat stewed in vinegar and then sweetened. Usually it's eaten with nice thick fries.

Willemijn of Whatsthatsmell asked earlier this week for a beer week's recipe called Zoervleisj translated into Sour meat? It was not a recipe I initially thought of but is a great part of this week. Zoervleisj is traditionally eaten in the South of the Netherlands in Limburg, but also in parts of Belgium and Germany.

In Limburg, you can get it even in the fast-food stands, because sour meat (zuurlvees) is preferably eaten with fries. Now you may think (by the name) that sour meats taste acidic, but nothing is less true. It's just a really sweet piece of meat. The meat is cooked in acid but after that, you bring the sauce to taste with syrup and gingerbread. That way you get a deliciously sweet stew.

Originally it is prepared with horse meat, but you can also prepare it with beef. And that's exactly what I did. 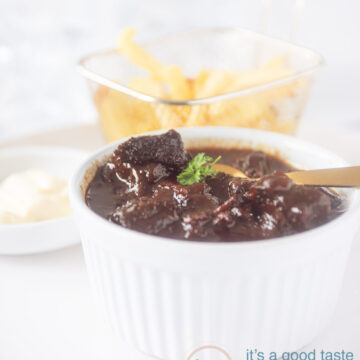 Print SaveSaved!
Dutch sour meat, zoervleisj in Limburg dialect, as the name implies, is meat stewed in vinegar and then sweetened. Usually, it's eaten with nice thick fries.

Prepare this in the slow cooker: