Tiramisu with eggnog: creamy layers, sweet peaches, and eggnog. This is a dessert that melts on your tongue. And it's very easy to prepare. The creamy layers are rich and full of flavor, but not too fat due to the use of ricotta. And because of the eggnog and peach, it's a recipe that's great for the Holidays. And if you've got any leftovers? The next day, when the flavors are absorbed, the taste is even better!

Ready in just ten minutes and easy to prepare: this simple and quick tiramisu with Dutch eggnog and peaches is an ideal dessert. And that's why it's such a great recipe for the holidays.

For adults, because eggnog contains alcohol. And whenever there are children and/or pregnant women who attend dessert? Just omit the eggnog and sprinkle a little bit of extra peach syrup on the cake for taste. It will be great!

Peaches at the holidays

When preparing this tiramisu with Dutch eggnog I use canned peaches. Now you may wonder why, but the simple reason is that it is not a peach season. You can't purchase them at the moment around here. But that doesn't matter, because they are also delicious when canned. And we use the syrup to flavor the cookies.

For the cookies, I choose macaroons. They absorb the syrup well and because they are made with almonds, they combine wonderfully with the peaches.

What do you need for Peach Tiramisu

For the preparation of these beef croquettes you need the following ingredients (you can find the correct amounts in the recipe card at the bottom of the blog):

How to make Tiramisu with Eggnog and Peaches

A recipe with extensive steps, the right amount of ingredients, and which you can also easily print can be found at the bottom of the blog.

Take the peaches out of the syrup and slice them into small cubes of about ¼ x ¼ inches (½ x ½ cm). Put the syrup in a separate bowl, you'll need it later on.

Step 3 - Add the first layers to the glasses

Dutch eggnog, advocaat, as we know it in the Netherlands, is made from egg yolks, brandy, sugar, and condensed milk. It's vicious and you have to wait a long time for it to slip out of your bottle.

That's why you don't drink it, but you eat it with a spoon (preferably with whipped cream;-)). The story goes that Advocaat originally is a recipe from the Netherlands Antilles, that founds its way to the Netherlands via the VOC, and that originally avocados were mixed with brandy.

Because avocados were more difficult to obtain in the Netherlands, but there were more than enough eggs, these two ingredients were exchanged and from that moment we know this variant. Advocaat, avocado sounds like a story that could be true, although I can't imagine how it would taste with avocado as a basis. Maybe I'll have to try it sometime. 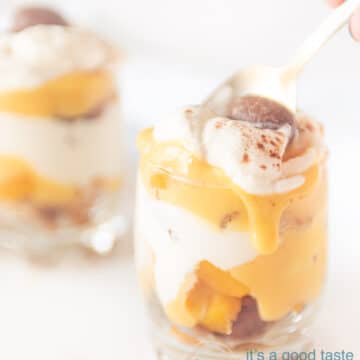 Tiramisu with Eggnog {and Peaches}

Print SaveSaved!
This is how you can make tiramisu with Dutch eggnog and peaches in a very simple recipe. The creamy layers are rich and full of flavor, but not too fat due to the use of ricotta. And because of the eggnog and peach, it's a recipe that's great for the Holidays. And if you've got any leftovers? The next day, when the flavors are absorbed, the taste is even better!

1. - Macaroons     Macaroons are made of ground almonds, which is a great combination of peaches. They also absorb the peach juice well, without becoming too soft. You can also replace them with (Frangipane) cakes, which I used before, but these are much harder to get.   2. - Peaches    In this recipe, we chose canned peaches. And that's because the peaches are not in season during the holidays and therefore aren't available as fresh produce. And, as an added benefit, you can now use the peach syrup for extra flavor.   3. - Substitutions      4. - Storage       5. Nutritional Values    The indicated nutrition facts are per serving. But you'll probably end up with some leftover ricotta cream, so the calorie count probably will be lower.

« Penne with smoked mackerel and tomato tapenade
Quiche with cauliflower, broccoli and cervelate »