This salmon which is very tender and has a mild lemon flavor that blends wonderfully with the cream sauce with dill. A good recipe for a raclette party!

Fish and dill are a delicious combination that appears in many dishes. As in this recipe, where the salmon, which is marinated in lime juice which is sprinkled with dill cream. This gives you a delicious tasty fish and a very nice raclette recipe.

Did you make this raclette recipes salmon baked in dill cream sauce? Tag #byandreajanssen via Instagram or twitter . I love it when you make one of my recipes and I’m looking forward to look it up. You can also share your recipes on my Facebook channel or pin this recipe on Pinterestso you can find it easy next time. See you soon! 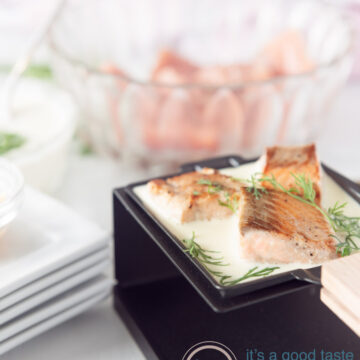