A wonderfully easy Monday recipe today with a video to show that it is really very simple to make. And tasty too. We are going to make:

But what exactly is a shish kebab? It's a dish that has its origins in the Middle East. A literal translation of Shish Kebab is skewer grill. It contains marinated pieces of meat or fish that you stick on a skewer, intersected with vegetables. You then grill this kebab until it's done.

As meat or fish can think of lamb, chicken, goat, shrimp or beef, but usually no pork. As vegetables you can think of onion, tomatoes, peppers, zucchini, mushrooms or fruit such as pineapple, mango and apple are commonly used.

When making a Shish kebab there are a number of points that you should definitely pay attention to. I have summarized them for you in some handy tips:

Watch How to Make It 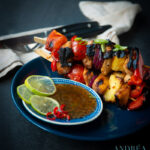 Print SaveSaved!
Shish kebab meat combined with veggies and fruit on a skewer. This time chicken marinated in Teriyaki sauce. Delicious on the grill and bbq