Home » Other » Other sweet » French toast with beer sauce

This recipe contains crispy raisin French toast baked on two sides in an airy egg mixture. And instead of sugar, sprinkle the French toast with a delicious sweet beer sauce.

Old bread, we don't have (fortunately) much leftovers. No, in our family of five a bread per day is no exception. Not that I eat a lot of bread, but growing teenagers ...

But very occasionally it happens that there is still some bread left. And by then you can use it easily t make French toast. Tasty bread soaked in egg, sprinkled with a little bit of sugar. But in the beer week I try to give French toast my own twist of course. So I started to use the egg mixture instead of milk with a little beer. I replaced the sugar with a beer sauce. It was a delicious lunch, which only I enjoyed (because yes under 18 no ...). 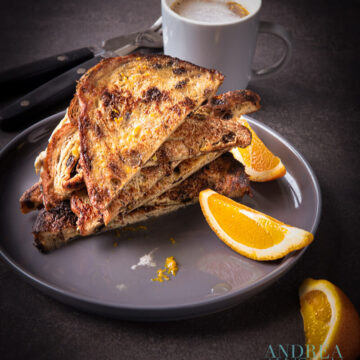 Print SaveSaved!
This recipe contains crispy raisin French toast baked on two sides in an airy egg mixture. And instead of sugar, sprinkle the French toast with a delicious sweet beer sauce.