This raspberry trifle looks terrific when you put it on the table. Foamy ladyfingers, a layer of sweet jam, followed by fresh raspberries, and all topped with a delicious vanilla whipped cream. This trifle is a sweet temptation. This dessert looks delicious in a nice (trifle) bowl but is also very elegant in beautiful glasses as a dessert for one person.

Do you want a delicious dessert that is also quick, easy, and simple to make? Then you have a recipe that meets all those requirements. You make it with fresh raspberries, jam, ladyfingers, and creamy whipped cream.

The dish is ready to serve in 10 minutes. Ideal for dessert for Mother's Day, Father's Day or a summer dinner. But also a good idea as a Christmas dessert! Especially because it is such an easy recipe.

Delicious sweet raspberries combined with ladyfingers and vanilla whipped cream. A dessert that is so tasty that one portion is always too little!

A dessert with seasonal fruit

Although this trifle certainly does not look out of place on the Christmas table, it is the most delicious during the raspberry season.

Then the fruits are so sweet that they need almost nothing. Tiny raspberry berries bursting into sweet flavors in your mouth.

But if it's not the season, or if you don't have raspberries, you can of course also use strawberries, mandarins or apple with cinnamon.

Step 2 - Cover the bowl with ladyfingers

Spread the ladyfingers over the bottom of the bowl. Also cover the sides if you like.

Step 4 - Top with a layer of vanilla cream

Cover the layers with the vanilla whipped cream. Smooth the cream layer, so that the raspberries are completely covered. Garnish with some fresh raspberries and if you don't want to serve it right away, store it in the refrigerator. The flavors will even become better by storing for one hour.

Can you prepare this raspberry trifle a day in advance?

Yes you can, but… I recommend making it the same day. If you want to make the trifle a day in advance, I have two tips
1. Make the trifle but add the layer of whipped cream just before serving.
2. Mix ⅔ cup (150 ml) cream with three tablespoons of mascarpone and use that as a topping.

Which alcohol can you use in a trifle?

In most trifles, you sprinkle alcohol on the cookies. In a traditional trifle, that's Sherry. But Cointreau, rum, or liqueur is certainly also tasty.

This trifle is delicious when you drizzle two tablespoons of sherry over the ladyfingers.

Please note that the trifle is then no longer suitable for children and pregnant people.

NB in this trifle we use a minimal amount of vanilla extract. Vanilla extract often also contains alcohol. If you don't want to use that, replace it with two teaspoons of vanilla sugar. The recipe is then alcohol-free. 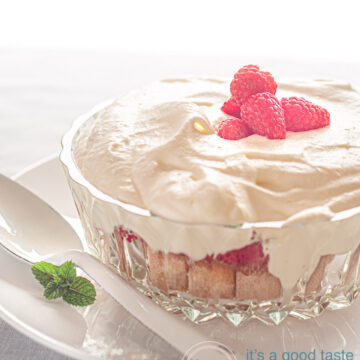 Print SaveSaved!
This raspberry trifle looks terrific when you put it on the table. Foamy ladyfingers, a layer of sweet jam, followed by fresh raspberries, and all topped with a delicious vanilla whipped cream. This trifle is a sweet temptation. This dessert looks delicious in a nice (trifle) bowl but is also very elegant in beautiful glasses as a dessert for one person.

1 - Raspberries A trifle made from fresh seasonal fruit is the very, very tastiest. In June to September, raspberries are delicious. But especially enjoy yourself with strawberries, mandarins, and apples with cinnamon. 2. - Vanilla extract Raspberries and vanilla are great together, so I added a little bit of vanilla extract to the whipped cream. In the winter it is wonderful to use cinnamon, for example. Vanilla extract often contains a little alcohol. If you don't have vanilla extract at home or if you don't want to use alcohol, you can also replace it with 2 teaspoons of vanilla sugar. 3. - Cream In this recipe cream is used instead of mascarpone, which gives you a lighter dessert. This is fine if you serve the dessert fresh (on the same day). But if you want to make it a bit longer in advance, replace ¼ cup (50 ml) of cream with 3 tablespoons of mascarpone and beat until stiff. This way the topping will hold its shape. 4. - Storage
You keep a trifle in the refrigerator until you are going to eat it. You can keep this raspberry trifle in the fridge for up to 2 days. Cover it lightly with plastic wrap. You can't freeze a trifle. 5. Nutritional Values
This recipe is enough for 4 people. Therefore the nutritional values ​​are based on 4 desserts. If you make the portions smaller, you can even prepare this trifle with six people. The nutritional values ​​(and calories will then be lower)