A cod and potato casserole that you can serve anyone at any time! Tender fish that is cooked in a creamy white wine sauce and covered with crispy rösti potatoes. And then you let it bake in the oven until it is golden brown. An easy recipe for dinner, but also for a special occasion such as Easter.

Cod fillet, a fish that you can season and fry in a pan, but which, due to its firmness, also lends itself well for a delicious oven dish. And because you must have a side dish, I made a top of rösti, which becomes deliciously crispy in the oven. This cod and potato casserole will be baked more often for sure!

When we eat fish, it's usually cod or salmon. Salmon is a bit more pronounced in terms of taste, but I am lucky that all children (and now my husband too) can appreciate this fish.

Cod, on the other hand, is soft in taste and most people love it. And that also counts for us. As I said before, I bake it, I deep-fry it (called kibbling), it is poached or baked in the oven as it is today. And the bowl is always empty afterward.

A soft fish in a creamy wine sauce combined with a crunchy rösti topping. A dinner that's great for any time!

Homemade rösti for your oven dish

I don't make rösti that often. Not yet, because it went very well in combination with the fish. Nice and crunchy and a nice taste together with that creamy fish.

You grate the potatoes coarsely and then season them with herbs and onion. Just fry and divide them over the fish. A nice flavor combination for this cod and potato casserole: the crispy rösti with the soft fish.

Step 3 - Place the fish in the baking dish

Now, this may sound a bit strange to the ears, but rösti comes from Switzerland and was once eaten for breakfast (source Wikipedia). You make it from grated potato and bake it until it is cooked and brown.

And while you don't have to add anything to a rösti, you can make the rösti even more delicious by adding onion, bacon, cheese, or herbs. 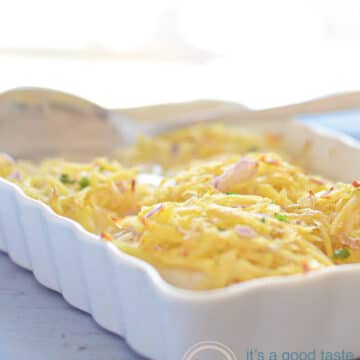 Print SaveSaved!
A cod and potato casserole that you can serve anyone at any time! Tender fish that is cooked in a creamy white wine sauce and covered with crispy rösti potatoes. And then you let it bake in the oven until it is golden brown. An easy recipe for dinner, but also for a special occasion such as Easter.

1. White wine - Use a dry white wine, such as Chardonnay or Sauvignon Blanc. If you prefer not to use wine, leave it out. 2. Potatoes - For rösti, you use floury potatoes such as Russet, Doré, King Edward, and Maris Piper. 3. Substitutes - Cod fillet - Cod fillet can be replaced by pollock, haddock, or sole. 4. Tasty with - It is also nice to season the rösti with bacon, green herbs, or cheese. 5. Store - Baked fish can be kept covered in the refrigerator for up to two days. Warm it up at 390 °F (200 °C) for 15 minutes. In this recipe, fresh fish is used. Therefore, you can freeze the fish in this recipe. Let it cool quickly and keep it in an airtight container/freezer box. You can now store the fish for up to two months in the freezer. Let it thaw in the refrigerator and warm up for 15 minutes in the oven at 390 °F (200 °C). If you used frozen fish don't freeze this dish. 6. Nutrition - The calories are calculated per portion of fish with rösti including ¼ part of the sauce. You probably won't be scooping up that much sauce, so the calorie count will be lower.