A classic from Argentine cuisine, a South American variation of an Italian dish: Milanesa a la Napolitana. A delicious recipe for a crispy schnitzel with tomato sauce, ham, and melted cheese. Your knife glides through all layers, and you get a flavor explosion with every bite. An easy recipe that you can put on the table in 15 minutes!

Milanesas a la Napolitana is an Argentine classic and is very popular in Argentine bistros, where it is on almost every menu. And it may sound a bit strange as the name reminds me of Italy, but there is a very good reason for that.

Did you know that at the end of the 19th century and at the beginning of the 20th century there was a super emigration of Italians? There was a lot of unemployment and disease at that time, and the Italians sought their happiness in other countries.

A large population of Italians settled in Argentina. And that is reflected in Argentine cuisine, where many Italian influences can be found.

And this recipe probably reminds you of an Austrian wiener schnitzel or Cotoletta Alla Bolognese. But they aren’t the same. They are all crispy and fried in much oil.

But the Wiener schnitzel has no topping (but is served with lemon wedges) and the second (Cotoletta alla bolognese) is made with Parmesan instead of Mozzarella and uses no tomato in its preparation.

What do you need for a Agentinian Italian Style Fried Steak

For the preparation of these Milanesa a la Napolitana you need the following ingredients (you can find the correct amounts in the recipe card at the bottom of the blog):

You can find a recipe that you can easily print at the bottom of the blog.

What is the difference between Milanese a Caballo and Milanese a la Napolitana?

Milanesa a Caballo is breaded meat with a fried egg on top (with a whole yolk). Milanesa A la napolitana has a topping of ham, tomato and mozzarella. 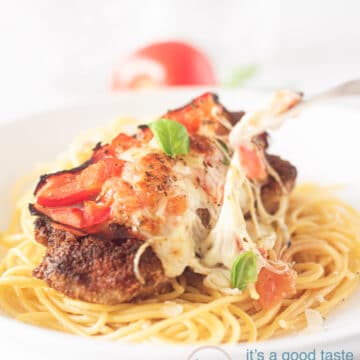 Print SaveSaved!
A classic from Argentine cuisine, a south American variation of an Italian dish: Milanesa a la Napolitana. A delicious recipe for a crispy schnitzel with tomato sauce, ham and melted cheese. Your knife glides through all layers and you get a flavor explosion with every bite. An easy recipe that you can put on the table in 15 minutes!

1. - Tenderloin  Also called beef tenderloin, it is the most tender piece of beef. You can replace it with roast beef, sirloin steak, top round steak, or diamond (tenderloin) fillet.

Before preparing it, let the tenderloin come to room temperature for 15 minutes. This way it cooks evenly inside and out. Dry the tenderloin on the outside before putting it in the pan. This prevents the splashing of oil or butter
Baking time guideline:

2. - Ham  Deli ham was chosen in this recipe because it has a lot of flavors. 3. - Tomatoes  You only need very little tomato for this dish, but it is really a seasoning. So try to select the tastiest tomato for this. 4. Serve with  Milanesas a la Napolitana is delicious with spaghetti, french fries or fried potatoes, and a salad.   5. - Storage  It is better not to keep this recipe. The crispy crust becomes soft during storage and that is less tasty. What to do if you have any leftovers? Cut into strips, fry until warm, and put together with some lettuce, bell pepper, and extra tomato in a wrap. Delicious for lunch. 6. - Nutritional Value  The nutritional information shown are per serving.