A healthy lunch or breakfast recipe, these oatmeal pancakes with plum compote. Made from scratch and after eating this, you won't get hungry for some time.

It's foodblogswap time. And quite frankly, I started a bit late because of the holidays. Although I had been assigned a super fun Dutch blog from Peggy called Peggys pastime. It contains Pastime which represents an activity that: "occupies one's spare time pleasantly". Now Peggy spends her spare time indeed in a great way. A blog with lots of recipes, but also books, nice pictures of what she does all year, in short all the fun things in life. And there are found these delicious oatmeal pancakes with plum compote.

And what's new, but certainly more often going to happen: I filmed the whole recipe for you. It makes it easier, so yu can't fail anymore. The video and the recipe are under the photo. And if you want to see more video recipes (or you want to get a message when a new video is uploaded) make sure to follow my youtube channel). Did you make this oatmeal pancakes with plum compote? Tag #byandreajanssen via Instagram or twitter . I love it when you make one of my recipes and I’m looking forward to look it up. You can also share your recipes on my Facebook channel or pin this recipe on Pinterestso you can find it easy next time. See you soon! 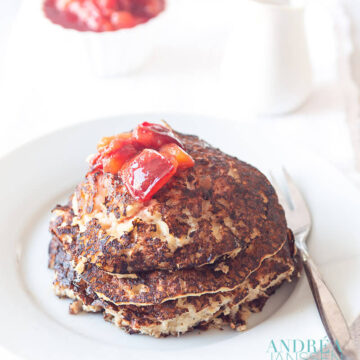 Print SaveSaved!
A healthy lunch or breakfast recipe, these oatmeal pancakes with plum compote. Made from scratch and after eating this, you won't get hungry for some time.