This recipe for banana cupcakes with caramel cream topping is delicious and airy. The caramel is a great combination with the banana. The cream melts in your mouth.

My son had his birthday and I made cupcakes. Banana cupcakes, strawberry, and chocolate cupcakes. In the next couple of weeks, I'm going to blog all the recipes, but I want to start with the banana cupcakes. They were delicious. People took two of them!!!
And I love to do cupcakes for a birthday party because they don't take a lot of work.

So for the recipe. I adapted it from Martha Stewart and they tasted terrific. 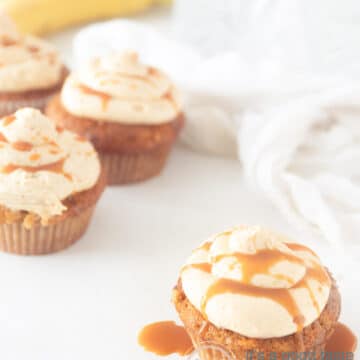 Print SaveSaved!
This recipe for banana cupcakes with caramel cream topping is delicious and airy. The caramel is a great combination with the banana. The cream melts in your mouth.