Homemade Cevapcici (Cevapi) - Delicious grilled minced meat sausages as you know them from the Balkans, home-seasoned and made. In terms of taste, they resemble the well-known sausages from vacation! You will be making this again and again!

Cevapcici, or Cevapi, is a meat dish you see in the Balkans. They are spicy sausages that you make from minced meat and then grill. Serbia, Croatia, Bosnia, and Montenegro, they all have their own variant. And you can eat them as take away.

They are eaten in flat bread (called pita bread) and are served with finely chopped onion, lettuce and sauce. It's a delicious meal, that's for sure!

Cevapcici, grilled spicy minced meat sausages, are not only delicious on holidays. You can now prepare them quickly at your own home!

You know this dish from the Balkans (southeast Europe), where every country has its own variant.

In Bosnia, the cevapi are short and a bit fatter. They are usually made from two types of ground beef.

If you order this in Serbia, you get a mixture of beef, lamb and/or pork.

In Croatia, you see that the Cevapcici are made from a mixture of beef and pork. This variant is thinner and longer compared to the Bosnian version

The recipe is very similar to other kebabs such as kofta and shish kebab. Dishes you see a lot in Turkey.

This dish goes back to the time of the Ottoman Empire (1299 to 1922). Initially, robbers outside the city made long meatballs and roasted them over fire. That dish was called Leskovac Cevap.

And as always with great recipes, it spreads quickly and by the mid-nineteenth century it was a favorite dish in Belgrade (Serbia). At the time, it was eaten as a snack after a night out.

In the first half of the twentieth century it became a recipe that was eaten for breakfast. You could buy it locally and it was one of the first take-away meals. It has since spread throughout the Balkans and has even become the national dish of Serbia.

Step 3 - Form the cevapi and brush with oil

Heat the BBQ or grill (pan) until it is very hot. Place the minced meat on the baking plate and grill for 12 minutes (turning the meat in between). Finely chop the onion and fry the flat bread. Fill the bread with onions and cevapcici and serve with the garlic sauce. Enjoy your meal! 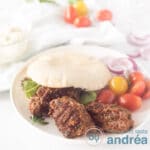 Print SaveSaved!
You probably know these delicious minced sausages from holidays in Bosnia, Serbia or Croatia. Because there you can get them in any restaurant. But you can also make them quickly and just as tasty at home. With easy to get ingredients.

1. - Minced beef Instead of minced beef you can also use  minced beef mixed with ½ pound (250 grams) minced pork, or ½ pound (250 grams) minced lamb with ½ pound  minced beef. 2. - Vegeta - Vegeta can be bought at Amazon. If you don't have it at home, you can replace it with vegetable stock powder. If you don't have it at home either, leave it out. 3. - Garlic sauce - Instead of this creamy sauce, you can also serve this with sour cream or Greek yogurt. Or serve with Ajvar (available in supermarkets or online). 4. - Baking soda - Add baking soda to get a crisp outside. If you don't  have baking soda? Then leave it out. 5. - Storage 7.- Nutritional value
The nutritional values ​​are shown per person, assuming you eat this with four people.