Forget baked potatoes, this potato gratin is the recipe you want to make! The top recipe of all potato recipes! You can make this French classic by mixing layers of potatoes with garlic, milk, butter, and Emmentaler cheese. And because you use milk instead of whipped cream, it is a slim version!

When you are going to make a dinner, it is of course always a challenge to put everything on the table at the same time. And then this potato gratin is really a godsend! Because you can prepare this recipe very well and, just before you are going to serve the main course, you slide the dish in the oven.

An easy potato gratin recipe that everyone likes. For a dinner without stress!

Gratin recipe for an easy dinner

My dinner recently consisted of a delicious dear steak with bacon (could well be prepared in advance, just grilled), with haricots verts rolled in bacon (just had to put them into the oven) and red cabbage from the slow cooker. And then the potato dish.

Because the haricots verts were also in the oven, I decided to make a gratin, which I "pre-baked" for an hour in the afternoon so that I just had to bake it in the oven for 30 minutes in the evening.

Fortunately, in retrospect, I can say that it worked. Everything was on the table at the same time and warm. So another challenge completed. And if you also have a dinner party soon? Perhaps this potato gratin (or one of the other recipes) works great for you too.

Step 1 - Butter the baking dish and brush with garlic

Step 2 - Divide the potato slices and sprinkle with Emmentaler

Step 3 Apply a second layer of potatoes and cheese.

Step 4 - Cover with cheese and butter, add milk and bake in the oven.

What is the difference between potato gratin and gratin Dauphinois?

The difference is that you make a potato gratin with cheese and a Dauphinois gratin is ALWAYS made without cheese. 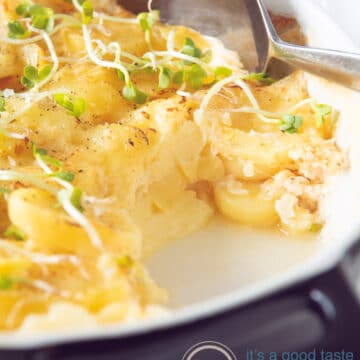 Print SaveSaved!
Creamy potato gratin, flavored with garlic, butter, milk and Emmentaler cheese. By using milk instead of cream this is a skinny version!

1. Salt - Use enough salt in this recipe. Because milk is used in this recipe, the salty taste is somewhat diminished and otherwise it quickly becomes bland. 2. Milk - This potato gratin is much slimmer than the classic variety because it uses whole milk instead of cream. 4. Potatoes - Choose floury potatoes such as Russet, Doré, King Edward, and Maris Piper for the best results. Preferably pre-cooked and sliced. If you don't have pre-cooked potatoes? Then peel and slice the potatoes. Bring a pan of water to a boil and add the potatoes. Cook them for ten minutes. Drain and cool so that you can handle them easily. 5. Alternatives - Emmentaler - Instead of Emmentaler you can also use Gruyère, aged cheese, or Mozzarella (the latter has a lot less flavor). Milk - Replace the milk with cream for a fuller flavor. Do you want to make this recipe slimmer? Use semi-skimmed milk (but it will taste less creamy). 6. Storage - You can "pre-bake" the potato gratin for an hour and then keep it covered in the refrigerator for a day. You then have to bake the potato gratin at 390 °F (or 200 ° C) for just another 30 minutes. Potato gratin will keep well covered in the refrigerator for 2 days. You can also freeze the cooled potato gratin. It will then keep for 2 months in the freezer. Make sure to freeze the potato gratin in a freezer container or bag. Let it thaw in the refrigerator. But know that the structure of the potatoes will change slightly as a result of freezing. 7. Nutrition -This recipe is enough for six adults. The stated nutritional values ​​are per person.