Baked Ham with Cumberland Sauce that's easy and elegant. Delicious for holiday gatherings and Sunday dinners. Cumberland sauce is a fruity mix, savory and sour, with a slight sweetness. The ham caramelizes in the oven because of the brown sugar rub. Everyone likes this easy recipe! It gives that special touch to the meat.

It almost comes with a delicious sauce when serving meat during the holidays. And whether that is a delightful jager sauce or a creamy mushroom sauce, it makes a piece of meat that little bit more special.

Cumberland sauce is a classic sauce that looks very elegant on the table. It is counted among the English classics, but did you know that the recipe was first made in Hanover, Germany, in the 19th century? The British Duke of Cumberland had ties to Hanover, which is also the link to the name. And although it originated in Germany, it is seen as one of the most delicious sauces in English cuisine. Cumberland sauce is delicious with game, ham, turkey, cold meats, roast goose, and duck. And this time served with baked ham.

When making this recipe, I chose to keep the ham simple because the complex tones of the sauce already give it enough flavor. A rub of brown sugar and mustard provides the ham with a delicious glaze. Together with the Cumberland sauce, an irresistibly tasty combination.

What do you need for Brown Sugar-Roast Ham with Cumberland Sauce?

To prepare this Baked Ham with Cumberland Sauce, you need the following ingredients. You can find the correct amounts in the recipe card at the bottom of the blog.

How to prepare Cumberland Sauce with Roast Ham

You can find a printable recipe with a step-by-step description at the bottom of this blog.

To serve - let the sauce cool and warm it on low heat before serving. Put in a serving jug. Cut the ham into thin slices and serve with warm Cumberland sauce.
This ham with Cumberland sauce is delicious served with Hasselback potatoes and green beans with herb breadcrumbs.

The sauce is savory and fruity, sour yet slightly sweet (but certainly not too). This is due to the combination of red currant jam, Port, mustard and shallot. 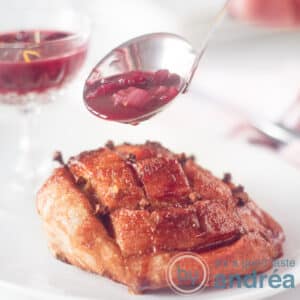 Print SaveSaved!
Baked Ham with Cumberland Sauce that's easy and elegant. Delicious for holiday gatherings and Sunday dinners. Cumberland sauce is a fruity mix, savory and sour, with a slight sweetness. The ham caramelizes in the oven because of the brown sugar rub. Everyone likes this easy recipe! It gives that special touch to the meat.

1. Ham - I used a small ham for my family, but you can easily upscale this recipe with the buttons (servings) on top. Suppose you use a raw ham count 40 minutes oven time per pound of meat. When using cured ham, use 15 minutes per 2 pounds of ham. 2. Red currant jelly - This recipe for homemade redcurrant jelly with Port is great jelly to use. And can you really not touch it? Then use red currant juice. Make sure you shake it well before adding. 3. Prepare the sauce several hours in advance, and then let it rest. This makes the taste more intense and tastier. Reheat on medium-high heat 4. Blanch the orange and lemon zest twice. This removes the bitter taste of the skin and leaves you with a fruity flavor. 5. Oven - When you use a conventional oven, set the temperature to 390 °F (200 °C). In a convection oven, 350 °F (180 °C) is sufficient. 6. Storage
Do you have any leftovers? Make sure you let it cool down quickly and store it away as soon as possible. Cumberland sauce Ham 7. The nutritional value is per serving, assuming that four people eat Ham with Cumberland Sauce.

More The most delicious Christmas recipes