French Onion soup is, I think, one of the best lunch soups in Winter time. With a crunchy slice of baguette with gratinated cheese. Always a winner!

This month I was a member of the Food blog Swap and the blog which was assigned to me to cook from was: the answer is food and that was extra fun because Maaike the author of this blog had made a recipe (the egg salad) last month from my blog. This made me look at her blog several times last month so I had already seen a couple of delicious recipes.

But when the match was made, I had to go and pick my favorite. Eventually, I went for a delicious French onion soup which, to my surprise, I had not yet blogged. A tasty onion soup can't be missing on a blog, what was I thinking? The only thing I have adapted to Maaikes recipe is that I added some garlic and half of the wine has been replaced with sherry. And I used three different types of onions. That just gives an extra touch of taste.

With this, I'm going to catch up with the loss of the previously placing of this delicious recipe and Maaike thank you very much for this great recipe! 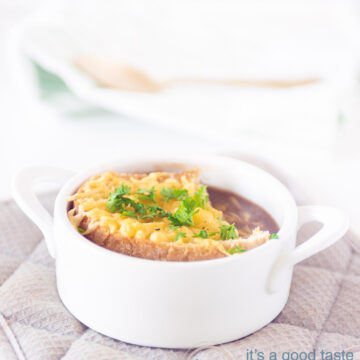 Print SaveSaved!
Onion soup is, I think, one of the best lunch soups in Winter time. With a crunchy slice of baguette with gratinated cheese. Always a winner!