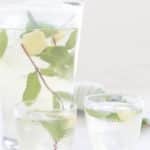 Making ginger iced tea yourself is easy and simple. And of course I'm going to share the recipe with you. This ice cold drink is delicious when the weather is super hot. And did you know that ginger helps with nausea and calms your stomach? But of course you don't have to be sick to enjoy a delicious glass. I promise you that it will always appeal to you. And because it's such a simple recipe, you're going to make it very often.

What is iced tea?

The first iced tea recipe written down dates from the 1876 where it was included in a cookbook. The original recipe is non-carbonated and the first recipes are sweetened with sugar. And usually served with lemon. And this ginger iced tea is also flavored with lemon and non-carbonated.

How do you prepare iced tea?

There are actually two ways to make iced tea. And I'll write both methods down here. I made this recipe using the hot brewed method. But there is also a second way that is gaining popularity. The cold-brewed variant. And what the difference is and some background for making your choice of method I explain below.

Before flavoring your iced tea with all spices, you add your sweetener to hot water and make sure it is dissolved. Then (or during the infusion of the tea) you also add the other seasonings, so that they have plenty of time to release their flavors. Strain the tea and fill to the right amount.

Let it cool in the refrigerator. Just before serving, add some ice (extra refreshing) and the garnish. The latter is not necessary for the taste, but the eye is also important!

This ginger ice tea recipe is made using the hot brewed method. But feel free to choose the cold-brewed variant if you like. The recipe can be used both ways.

When preparing the cold brewed version, add tea to cold water and let it flavor for 6 to 8 hours in the refrigerator. You get the best result if you use loose tea, which you strain afterwards. With tea bags, the taste of the tea is less present.

But why would you choose cold brewed iced tea?

When using hot water, the tea releases a bitter taste. Because of the heat of the water, Tanines that are naturally present in the tea leaves will be released and that cause the bitter taste. This does not happen when you use the cold brewed method. Therefore you need less sweeteners this way and as a side effect the taste of the tea is less pronounced.

Actually, this way of making (iced) tea is the most common. You boil water and then turn off the heat. Dissolve the sweetener and steep the tea in the hot water. You can also add flavorings of your choice (herbs, lemon, spices such as cinnamon and star anise). Then let the drink cool and get very cold in the refrigerator.

Why choose iced tea made with hot tea?

This method is by far the fastest method, in which you have a tasty chilled glass tea within a few hours. And you can also use tea bags instead of loosen tea because the flavors are much better released in hot water.

A third advantage of this method is that you can dissolve sweetener, often sugar, well in the hot water. Sugar hardly dissolves in cold water.

And as a final advantage, there are also many people who find the bitterness caused by the Tanines just tasty and refreshing. Everybody has got it's own personal flavor choice.

Is ice tea bad for you?

Anything you drink and eat too much is not good for you. This recipe contains sugars, which is why you shouldn't drink too much, otherwise you will be consuming too many calories in a day (but an occasional delicious glass really doesn't hurt).

So too much sweetened iced tea is not good, but you should also not drink too much of the unsweetened variant. In addition to very good substances, tea also includes substances that you should not ingest too much. The advice is therefore always to eat and drink varied. And this is the truth for every kind of food or dink. My grandmother used to say, it is never good to have too much of anything except of satisfaction.

Below I share a basic recipe for ginger iced tea. But of course you can vary endlessly with this. For example, consider:

You can prepare this recipe up in front and can store it for a few days. And off course I've got some tips for you:

If you prepared this recipe for homemade ginger iced tea and you like it, you probably want to try these recipes: 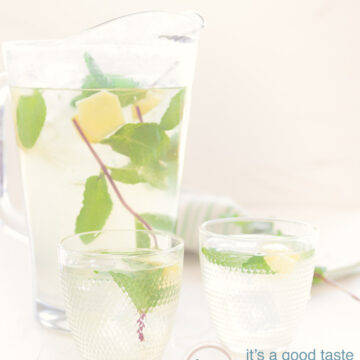 How to prepare the BEST homemade ginger iced tea you've ever tasted? | With just 5 ingredients
Watch this video on YouTube.