The Spanish tortilla is one of the tastiest egg recipes in the world. It is an omelet filled with onion, potatoes, and eggs. And you serve it as lunch, dinner, or as a snack when having a Tapas evening. This Spanish tortilla is baked in the oven and has bacon and Gruyère as extra seasonings. And that gives this already so delicious recipe an extra bit of flavor. Try it yourself!

Do you ever go on holiday to Spain? Then you often see this tortilla on the menu of many restaurants. And for good reason, because this is a really delicious recipe.

You can best compare it with an omelet that you fill with a lot of tasty flavors and then bake in the pan (or in this case in the oven).

The standard ingredients for the Spanish tortilla are onion, potatoes, and eggs. You pre-cook the potatoes and fry them for a bit before adding them (otherwise they will be raw when your tortilla is ready).

I have added bacon, sundried tomatoes, walnuts, and Gruyere to this base. Because they combine wonderfully with the onion, potatoes, and eggs. It gives just a little extra flavor to this Spanish omelet.

This recipe is adapted from the Dutch blog Piens food club.

A delicious filled Spanish tortilla from the oven with bacon, tomato and cheese. Serve as lunch, dinner or Tapas snack (yes this recipe is very versatile)!

A full list of ingredients can be found at the end of this blog.

A recipe that can be printed can be found at the bottom of this blog in the recipe card.

Step 1 - Fry the potatoes and add the vegetables and bacon

Step 2 - Mix the eggs with the rest of the filling

Step 4 - Carefully remove the cast iron pan with the Spanish tortilla from the oven. Cut the omelette into wedges and serve immediately (or cut into small cubes if you want to serve it as tapas).

What's the difference between a tortilla and a frittata?

The difference between a frittata and a Spanish tortilla is that a tortilla is always made with potatoes. And that's not the case with a frittata.

Can you eat a Spanish tortilla cold?

You can eat it cold or hot. It is therefore very versatile. Eat it as tapas. lunch or take it with you on a picnic.

What can you serve with a Spanish tortilla?

Serve the tortilla with a green salad, tomato soup or focaccia. All three super tasty combinations. 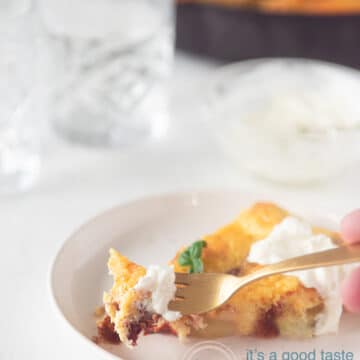 Print SaveSaved!
The Spanish tortilla is one of the tastiest egg recipes in the world. It is an omelet filled with onion, potatoes, and eggs. And you serve it as lunch, dinner, or as a snack when having a Tapas evening. This Spanish tortilla is baked in the oven and has bacon and Gruyère as extra seasonings. And that gives this already so delicious recipe an extra bit of flavor. Try it yourself!

1. - Potatoes - For a tortilla, you prefer to use waxy potatoes, such as Red Adirondack, French fingerling, and Red Bliss You can also choose to use pre-cooked potato cubes. 2. - Alternatives
Bacon - If you prefer a vegetarian version, use fried mushroom slices (about 2 oz./50 grams) or extra sun-dried tomatoes in strips.
Gruyère cheese - This tortilla is made with Gruyère cheese because it is cheese with a lot of flavors. You can also use Emmentaler or Cheddar. 3. - Oven This Spanish tortilla is baked in a convection oven at 400 °F (200 °C). If you use a conventional oven bake this omelet at 430 °F (220 °C). 4. - Nutritional values ​​- This recipe is based on a lunch dish for four adults. The nutritional values ​​include sour cream topping.