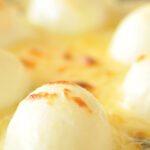 A classic French recipe: A delicious florentine eggs with spinach recipe. The eggs are still a bit soft, with fresh spinach and a delicious Mornay sauce.

A delicious brunch recipe: Florentine eggs. The eggs are cooked until they're slightly soft. The spinach is blanched and after that the veggies are placed with the eggs in a casserole. A delicious homemade Mornay sauce (with butter, egg yolk and crème fraîche) is the topping. A classic recipe from the French Kitchen.

Why is this recipe called Florentin?

This French recipe is made with spinach. Traditional stories tell that Catherine de Medicis who married Prince Henry of France in 1533 introduced spinach to the French cuisine. This Catherine was born in the Florence region in Italy and the story goes that Florence / Florentine is named in tribute to Catherine.

What's the difference with Egg Benedict

Another well-known egg dish is Egg Benedict, and this recipe is of American origin. Both recipes are often confused, but are definitely not the same. Although in both recipes the eggs are topped with a creamy sauces, the Egg Benedict recipe does not contain spinach. Egg Benedict, on the other hand, has the addition of bacon. Also a very tasty recipe.

Besides Egg Benedict, there are many more well-known variations: Egg mornay, Egg Blackstone and Egg Blanchard to name a few.

Florentine egg recipes which can be found in cookbooks or the internet differ mainly by opting for a poached egg or a boiled egg. For this recipe I've chosen boiled eggs. This has the advantage that you can prepare the recipe for a big part in advance, you can prepare it quite easily for more than 4 people and it is also easy to prepare. And it makes the dish suitable for the elderly and children, because the yolk has solidified.

Poached eggs are made by breaking the egg over boiling water while swirling the water. It is one of the most difficult techniques for preparing your egg, but also one that is definitely worth it in terms of taste. It's not suitable for elderly and Children because the yolks are not done. But if you want to prepare poached eggs you can find the description for making poached eggs in this recipe.

The Hollandaise sauce is made with egg yolks, vinegar, white wine and a lot of butter. Like the ingredients you use in mayonnaise (only use butter instead of oil) and it's an emulsion sauce (that's what it's called). You beat the egg yolks nice and light and then you heat everything to a nice airy sauce.

A de Mornay sauce is a béchamel sauce with cheese: a full Gruyère cheese. The sauce is therefore very rich and filling.And the cheese will brown wonderfully under the grill. The sauce contains less butter compared to the Hollandaise sauce. 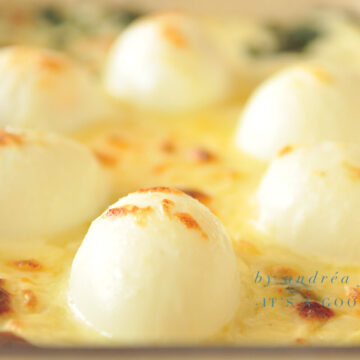 Print SaveSaved!
A classic French recipe: A delicious florentine eggs with spinach recipe. The eggs are still a bit soft, with fresh spinach and a delicious Mornay sauce.