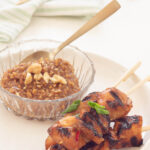 This delicious Pork Satay from the BBQ with a recipe for a creamy peanut sauce, makes every grill moment a party. An easy Indonesian recipe.

After many tries I have now found the recipe for the most delicious grilled pork tenderloin satay from the BBQ and I would like to share it with you. You can prepare the marinade in just 10 minutes and the marinating time is not that long either. You can start grilling after just 2 hours. And to complete the recipe, I added the recipe for a delicious creamy peanut sauce. Not always necessary, because the satay is already super tasty, but if you like satay sauce, then this fits perfectly.

Satay originated in Indonesia and its cubed seasoned meat on a stick with a sauce. After marinating, it is grilled or barbecued. It is best known in South East Asia, but it is also very popular in Suriname and the Netherlands.

For satay you can vary with chicken, beef or pork as meat, but sometimes fish, goat or even tofu (for a vegetarian variant) is also used.

Pork tenderloin is the most tender piece of pork meat and it is located in the back. It is therefore a favorite with many people. The meat is ready in a short time and contains few tendons. And you can marinate it well. That is why it is very suitable to make satay.

You can bake pork tenderloin in the pan, in the oven or grill it. It may look a bit pink after preparation and that is the way it's recommended because that makes the meat extra juicy and tender. The core temperature should then be 145 degrees Fahrenheit (63 degrees Celsius).

This is a recipe for pork tenderloin satay from the BBQ with peanut sauce. But you can vary endlessly with this delicious recipe:

Preparing a barbecue can sometimes be a lot of work. And estimating the quantities can be quite difficult. Here are some tips on how to properly pre prepare and store the leftovers.

Print SaveSaved!
This delicious grilled pork tenderloin satay from the BBQ with a recipe for a creamy peanutsauce, makes every grill moment a party. An easy Indonesian recipe.