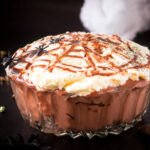 A dinner shouldn't be served without a dessert and I would say and a trifle is on my favorites list. This time I came up with a delicious brownie layer that is sprinkled with caramel syrup. Crumbled Oreo cookies, creamy chocolate mousse on top and then sprinkled with small-cut fudge cubes. Repeat it all. And then finally you end up with a delicious layer of whipped cream in which you draw a chocolate spider web.

By the way, such a chocolate spider web sounds a lot harder to prepare than it in reality is. With the chocolate sauce, you make a number of circles from large to small on top of the whipped cream. Then draw lines from the inside to the outside with a satay skewer. And after that your spider web is ready. (In the recipe at the bottom you can see this step in pictures).

Can you make this trifle a day before?

It is best to make the easy Halloween trifle with Oreo cookies an hour before eating and let it cool well in the refrigerator. If you would make this trifle much earlier the brownies and the Oreo cookies will become completely soft. And that bite is just so great when you're eating that you just don't want to omit it.

So for Halloween dinner, you make a fresh trifle. But if you have any leftovers, I certainly would put them in the refrigerator and enjoy them the next day. Because even though the brownie and the Oreo have a slightly different structures, it is a shame to throw this perfect trifle in the bin.

A full list of ingredients can be found at the end of this blog.

You can find a recipe that you can easily print at the bottom of this blog.

The (printable) recipe in steps to prepare this easy Halloween trifle with Oreo can be found at the bottom of this blog.

Step 2: Smear half of the chocolate mousse on top of the Oreo's. Cut the fudge in four pieces and spread half of this on the mousse. Repeat all these layer, so first a brownie layer, caramel syrup, crumbled Oreo cookies, chocolate mousse and and with the fudge.

Step 3: Whisk the cream until it's stiff and top the trifle with the whipped cream.

Step 4: Take the chocolate sauce and draw circles on top of the whipped cream. Work from the outer circle inwards and end with a dot in the middle of the cream. Take a satay skewer and draw lines from the inside to the outside. The circles will get a spiderweb form. 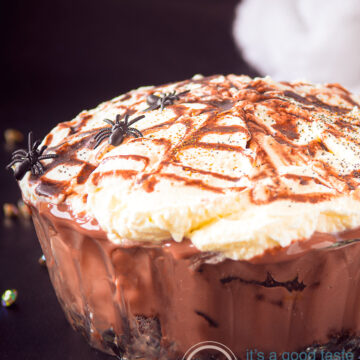