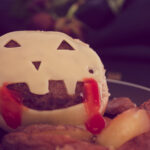 The dinner this week a spooky cheeseburger with homemade oven-baked fries. And still healthy too! It is best served with a crispy salad.

A cheeseburger is a burger with a slice of cheese placed on it. Simple as that and it exists for 88 years. And maybe as a surprise, it wasn't invented at a fast-food chain. It was first made in 1926 by Lionel Sternberger who took a slice of American cheese and placed it on a burger and it was a resounding success. In subsequent years, at various menus in Los Angeles, the Cheeseburger made its appearance. And later it conquered the world by means of fast-food restaurants. So we're done with the brief history lesson and as it became clear that not the large M was the inventor of this great burger.

When I buy my burger, I always buy a beef burger and a nice piece of matured cheese. And I love to bake some fries in the oven to go with it. Quick and healthy fast food as we call it around the house.

And when I searched for some Halloween inspiration on the web, I came across this idea quite a number of times in different variations. And for me, it represents the best dinner for an American party like Halloween. So herewith, my fast food Cheeseburger with homemade oven fries for Halloween!

How is a Cheeseburger prepared?

Preparing a Cheeseburger is actually very easy. You bake a hamburger and just before serving, let the cheese fry briefly, about 30 seconds. You do this by putting the cheese on the hamburger. Nothing else is needed.

Normally you take a delicious cheese, such as Cheddar, Mozzarella, or blue cheese. It gives extra flavor. But this time I chose a Gouda cheese. Compared to Cheddar and Mozzarella, it doesn't melt very quickly (which is nice because you have cut out a face) The blue cheese has a rather pronounced taste that children (and that's what this Halloween dinner is meant for), don't always like.

This cheeseburger with homemade oven-baked fries for Halloween is made with the following ingredients (and yes there are really only 5!).

How do you prepare these Cheeseburgers and oven-baked fries?

Step 1: Scrub the potatoes and cut them into wedges. Bring a pan of water to a boil and cook the potatoes for 10 minutes.

Step 2: Heat a frying pan on the stove with 2 tablespoons of oil in it. After 10 minutes, remove the potatoes with a slotted spoon from the boiling water and put them in the hot frying pan. As a result, the potatoes cook dry very quickly and they get crispy outside in the oven (and keep a delicious soft inside).

After about 30 seconds, spread the potatoes over a baking tray and bake the potatoes for 30 minutes in a preheated oven (400 degrees Fahrenheit / 220 degrees Celsius).

Step 3: Cut the cheese into the desired shape with a sharp knife. Also slice the bun in half (make sure it is pre-baked, as stated on the package if you still need it to bake).

Step 4: Fry the hamburger on both sides until golden brown and done. Place the hamburger on the bun and put the slice of cheese on top. Serve with the oven-baked fries and a delicious green salad. 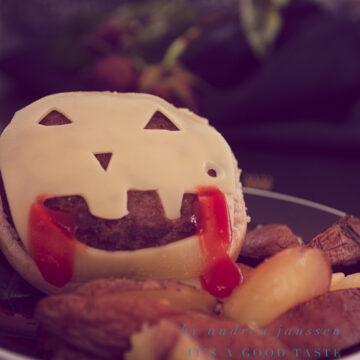 Print SaveSaved!
The dinner this week a spooky cheeseburger with homemade oven-baked fries. And still healthy too! It is best served with a crispy salad.